The Wu-Tang Clan is a New York City-based hip-hop group, which consists of: RZA, GZA, Method Man, Raekwon, Ghostface Killah, Inspectah Deck, U-God, Masta Killa and Ol' Dirty Bastard.  They are frequently joined by fellow childhood friend Cappadonna, a quasi-member of the group. They were formed in (and are generally associated with) the New York City borough of Staten Island (referred to by members as "Shaolin"), though some of its members originate from Brooklyn. 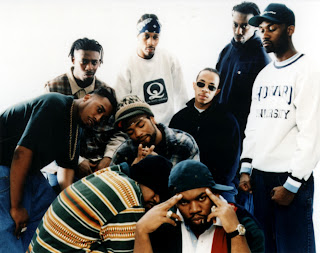 The founders of the Wu-Tang Clan were cousins Robert Diggs, Gary Grice, and Russell Jones, (RZA, GZA, and Ol' Dirty Bastard).  The name "Wu-Tang" is derived from the name of the mountain Wu Dang (Wudang Shan) in northwest Hubei Province in central China with long history associated with Chinese culture, especially Taoism, martial arts and medicine. The RZA and Ol' Dirty Bastard adopted the name for the group after the film Shaolin and Wu Tang.

The Wu-Tang Clan first became known in 1993 following the release of the independent single "Protect Ya Neck", which immediately gave the group a sizable underground following, especially after their tour with Kat Nu and Cypress Hill. The group members sold the single to local record stores and radio stations, and it became an underground success. Loud Records soon signed the Wu-Tang Clan to a deal that gave the group members creative control and the freedom to negotiate solo projects with other labels. In 1993 Loud released Enter the Wu-Tang (36 Chambers). This album turned out to be critically acclaimed, and to date is regarded as one of the greatest hip hop albums of all time.
RZA was the first to follow up on the success of Enter the Wu-Tang with a side project, founding the Gravediggaz with Prince Paul and Frukwan (both of Stetsasonic) and Poetic. The Gravediggaz released 6 Feet Deep in August 1994, which became one of the best known works to emerge from hip hop's small sub-genre of horrorcore. The first Wu-Tang member to become a major solo star was Method Man. In November 1994, he released Tical on Def Jam Recordings, the first official Wu-Tang solo album. Again, RZA produced the album, creating a dense, dirty sonic collage. Tical became a big hit in early 1995, as did Meth's duet with Mary J. Blige, I'll Be There for You/You're All I Need to Get By. Ol' Dirty Bastard followed Method Man's breakthrough success with Return to the 36 Chambers, which appeared in March 1995 on Elektra Records. Thanks to the hits "Brooklyn Zoo" and "Shimmy Shimmy Ya," the record became a gold success. 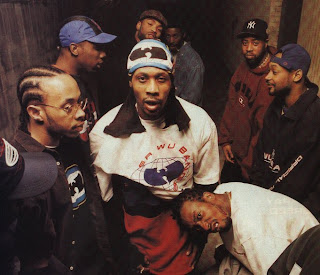 Later in 1995, the two most critically acclaimed Wu-Tang records appeared: Raekwon's Only Built 4 Cuban Linx and Genius/GZA's Liquid Swords. Raekwon released his album on Loud/RCA in August 1995; the record featured extensive contributions - a total of 12 songs - from Ghostface Killah, his greatest exposure yet. GZA/Genius narrated Liquid Swords (1995), produced by RZA, the most dramatic and cinematic of the solo projects. In February of 1996, Ghostface Killah's first solo track, Winter Warz, appeared on the Don't Be a Menace to South Central While You're Drinking Your Juice in the Hood soundtrack. Later that October, he released his own solo debut, the critically acclaimed, '70s soul-flavored Ironman; the record was the first released on RZA's new Epic subsidiary, Razor Sharp Records.
The Wu-Tang Clan finally reconvened and returned with their second album, the double-CD Wu-Tang Forever, in June of 1997. Hugely anticipated, the album entered the charts at number one - selling over 600,000 copies in its first week alone - and quickly spawned the hit single Triumph. There were several contributions from guest associate Cappadonna, who'd appeared on Only Built 4 Cuban Linx and Ironman. The group toured extensively in support of the album.

In the meantime, the next phase of the Wu-Tang plan started to take shape: unearthing new associates and spinning the resulting stable of talent into a brand-name franchise. A group of Wu protégés dubbed Killarmy released their debut album, Silent Weapons for Quiet Wars, on Priority Records in August 1997, drawing heavily upon the Clan's martial imagery. 1998, however, was truly the year for Wu-related side projects. In March, Cappadonna released his solo debut The Pillage on Columbia. The same month, Killah Priest - not an official part of the Clan, but a frequent guest and a member of another protégé group called the Sunz of Man - made his solo debut on Geffen Records with Heavy Mental, an acclaimed album filled with spiritual imagery that established him as one of the more distinctive solo artists in the Wu-Tang orbit. In July the Sunz of Man released their own debut album, The Last Shall Be First, on Red Ant, and yet another group of up-and-comers dubbed the Wu-Tang Killa Beez released their first album, The Swarm, Vol. 1, on Priority, featuring a number of guest appearances by Wu members and associates. In August, Killarmy issued their second album, Dirty Weaponry. 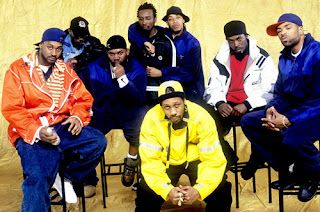 1998 was also the year Ol' Dirty Bastard began a long and bizarre saga of erratic behavior and run-ins with police that found him making headlines with alarming (and ridiculous) regularity. In February he interrupted Shawn Colvin's acceptance speech at the Grammy Awards to protest the Clan's loss in the Best Rap Album category; shortly thereafter, he announced he was changing his name to Big Baby Jesus. This was only the beginning - over the next year and a half, ODB would be arrested for a litany of offenses that included assault, shoplifting, making terrorist threats, wearing body armor after being convicted of a felony, possessing cocaine, and missing countless court dates. Plus, in early 1999, the whole Clan fell under suspicion of masterminding a gun-running operation between Staten Island and Steubenville, OH, charges that were never proven to have any validity.
The group reconvened once again to make The W, though without Ol' Dirty Bastard, who was at the time incarcerated in California for violating the terms of his probation. Though incarcerated, ODB managed to make it onto the track "Conditioner" which featured Snoop Dogg. ODB's vocals were recorded via the telephones used for inmates to talk with visitors, while in prison. The W was mostly well received by critics, particularly for The RZA's production, and also gave the group a hit single with the uptempo "Gravel Pit", part of a trilogy of videos where the group would visit different eras with a time traveling elevator, which also included "Protect Ya Neck (The Jump Off)" and "Careful (Click, Click)", which were then followed by "I Can't Go to Sleep" featuring Isaac Hayes. The album would go on to reach double platinum status. In 2001, the Wu-Tang Clan released Iron Flag, an album which made extensive use of outside producers and guests. GZA/Genius dropped his new album Legend Of The Liquid Sword in December 2002.
In August 2003 Ol' Dirty Bastard returned home and immediately signed a new deal with Jay-Z's Roc-A-Fella Records the same day of his release. An official mixtape titled Osirus featuring many new songs was released in March 2005, but ODB's Roc-A-Fella album A Son Unique, which should have been released in 2005, had numerous delays until now. Ghostface Killah joined Def Jam Recordings to build his own Starks Enterprises imprint. Raekwon jumped to Universal Records and his shaping up his own company: Ice Water, Inc. Masta Killa released his first solo album No Said Date in 2004. In early 2004, U-God apparently left the group in disgust. A DVD titled Rise of a Fallen Soldier was released detailing his problems, which were mostly with his treatment by RZA, who he claimed had hindered his success as a solo artist. He also formed a new group of young protegés called the Hillside Scramblers, with whom he released the album U-Godzilla Presents the Hillside Scramblers in March 2004. The dispute culminated in a heated phone conversation between RZA and U-God on live radio, which ultimately saw the two reconcile. He has since returned to the group and is heavily featured on solo albums, Wu albums, and projects.
On November 13, 2004 the most tragic moment in the Wu-Tang history happened as Ol' Dirty Bastard collapsed at approximately 5:29 p.m. at Wu-Tang's 36 Chambers studios on West 34th Street in New York City. Less than an hour later he was pronounced dead, only two days before his 36th birthday. His funeral service was held at Brooklyn's Christian Cultural Center.
In 2005 RZA premiered as a writer and published his first book the Wu-Tang Manual giving an inside view of the philosophy behind the Clan. The manual is divided into four books each containing nine chambers totaling 36 chambers. The chapters include biographies of each member, an explanation of the famous Wu-Tang slang, a history on the Wu-Tang Clan logo, explanations of diverse influences like the Nation of Gods and Earths, chess, comic books, drugs, and martial arts. The book also shows RZA's views on music, spirituality and producing, and a lyrical guide to the meanings of key Wu-Tang songs. U-God also released his second album Mr. Xcitement in 2005 and GZA started his collaboration with DJ Muggs, GrandMasters. 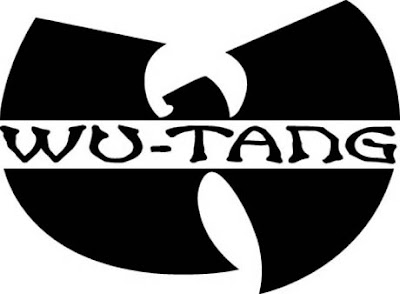 On March 28, 2006, Ghostface Killah released Fishscale which was followed by the release of More Fish in December. The whole Clan, including Cappadonna and the deceased ODB, appeared on "9 Milli Bros." Method Man came back with his critically acclaimed 2006 album 4:21... the Day After. He was heavily featured in the media due to his displeasure with Def Jam's handling of his project, and despite not having any promotion or airplay the album still debuted in the Billboard Top Ten. 2006 also saw the release of Masta Killa's second studio album, Made in Brooklyn, and Inspectah Deck released an official mixtape titled The Resident Patient on June 25, 2006, a prelude to his next album The Rebellion. Finally in December 2006, the Wu-Tang Clan signed a one-album deal with Steve Rifkind's SRC Records, who released the group's four previous albums on Loud Records. The album was titled 8 Diagrams referring to the Kung Fu classic movie The 8 Diagram Pole Fighter and has been released on December 11, 2007.
RZA announced the release of a new Bobby Digital album DigiSnacks in summer 2008, which he has already begun to work on. Raekwon's Cuban Linx 2 and GZA's new album Protools are also scheduled for releae this year.
On June 29, 2011, Raekwon announced that the group were working on a new studio album, still in early stages. Ghostface Killah later revealed in an interview during their European Rebirth Tour that the album should hit the shelves in May 2012.

Discography:
Posted by shushka at 6:48 PM